It’s unspeakably cold and bleak, but myself and my long suffering sweetheart have been granted a night away without our ‘charming’ offspring, so despite the weather, we’re determined to enjoy a mini-break. The destination of choice is Stratford upon Avon. No, we haven’t got tickets to a play, yes yes I know, because it was sold out. Never mind, it’s the Theatre itself I’ve come to see, and it’s certainly quite a place. A monstrous living-breathing red brick memorial to the bard, that has caused a fair bit of controversy ever since it’s construction in 1932. Despite some undeniable flaws in the original design and the unsympathetic nature of its scale in this historic riverside town, it has grown to be treasured within both the theatrical, and architectural communities. Admiring it from the frosty riverside gardens is one thing, but to understand what you’re looking at requires a look into the building’s, and its predecessor’s, past.

The first Shakespeare Memorial Theatre was built in 1879, perched in a picturesque setting on the banks of the Avon. Designed by Dodgshun & Unsworth, the building was said to be “a delightful and fantastic blend of Mediaevalism, combined with Elizabethan or ‘Old English’ elements”. Contemporary reports of both its appearance and practicality aren’t hugely favourable. But despite not being the faithful Globe recreation that some had hoped for, it was not entirely without merit, and was certainly unique. It would not survive though.

Despite the sensible addition of a water tower in the design, on the afternoon of Saturday March 6th 1926, fire would tear through the building, leaving only a shell, and the slightly later museum wing (attached by a wooden bridge seen in the above image) in its wake. The cause of its ignition is still unknown to this day, but threw up the question of how to replace such an important structure.

The following year a competition was set to design the new theatre. Of the 72 entries received, the winning design was by 29 year old Elizabeth Whitworth Scott. Scott, an early graduate of the Architectural Associations’ new London School was somewhat of a trail blazer. Female architects in this period were extremely rare, but then, Scott had an exceptional pedigree. Her great-uncle was George Gilbert Scott (a prolific gothic revival architect) and she was second cousin to Giles Gilbert Scott, who had a glittering CV including design of the iconic K2&3 red telephone boxes, Liverpool Cathedral, and the consultant architect duties for the construction of Battersea Power Station. Having such a talented and respected family behind her must have been a huge boost in confidence for Elizabeth, and no doubt helped her overcome some of the many gender related obstacles she must have faced. The Memorial Theatre was to become the first major public building to be designed by a woman, and Scott’s only theatre.

The winning design caused a huge amount of controversy in both the theatrical and architectural worlds, but was said to be the only genuinely modern submission in a sea of “Mock-Tudor and Post-Gothic horrors”. HRH the Prince of Wales cut the ribbon at the grand opening held on April 23rd 1932, Shakespeare’s birthday (he would have been 368). Sir Edward Elgar, who was due to be the new theatres musical director, was so furiously upset with that “awful female” and her “unspeakably ugly and wrong” design, that he wouldn’t even enter the premises and had nothing more to do with it. The Manchester Guardian’s review labelled the structure “startling, monstrous (and) brutal”, while others have been known to cite its similarities to industrial buildings of the period, and moan that its huge bulk is far too overpowering for the quaint site. In my humble eyes at least, this seems to be far too harsh a criticism, and simply shows the adverse reaction to the refreshing modernist approach of the period. Even Scott herself admitted that the design had “not intended to conceal the functionality of the building”. Gone were the fancy decorative adornments of the previous era, to be replaced by function in its bare form, which in itself, is surely a thing of beauty?  Thankfully English Heritage also held it in high regard, and granted the theatre listed status in 1971 (its currently grade II*).

If externally Scott’s theatre was unduly criticised, perhaps complaints of its internal layout were more valid. The auditorium was of proscenium arch design, seating an audience of 1400 in three tiers (stalls, circle, and balcony). This sheer scale and relatively plain decor, created a lack of intimacy, rendering it extremely hard for the cast to ‘connect’ with the audience. Consistent complaints about the lack of audibility from the back rows, and comments such as “reciting from the stage was like addressing Calais from the white cliffs of Dover” led ultimately to an inevitable redesign.

In the mid-1980s, the remaining walls of the original 1879 theatre, which for six decades had been left as an empty shell following the fire, were used to house a new smaller theatre christened The Swan. The intimate auditorium, seating 450, was designed with a deep thrust stage and galleried viewing, essentially a slightly modernised take on an original Elizabethan theatre-in-the-round.

Proving to be a huge success with both cast and audience alike, this approach was to be adopted in the main theatre. After abandoning initial plans to completely replace Scott’s building, the RSC commissioned Bennetts Associates to re-imagine the complex, bringing all the facilities into the C21st. In 2007 work commenced on the three year project, with initial performances held from November 2010, and a grand opening by HRH the Queen & the Duke of Edinburgh in March 2011. 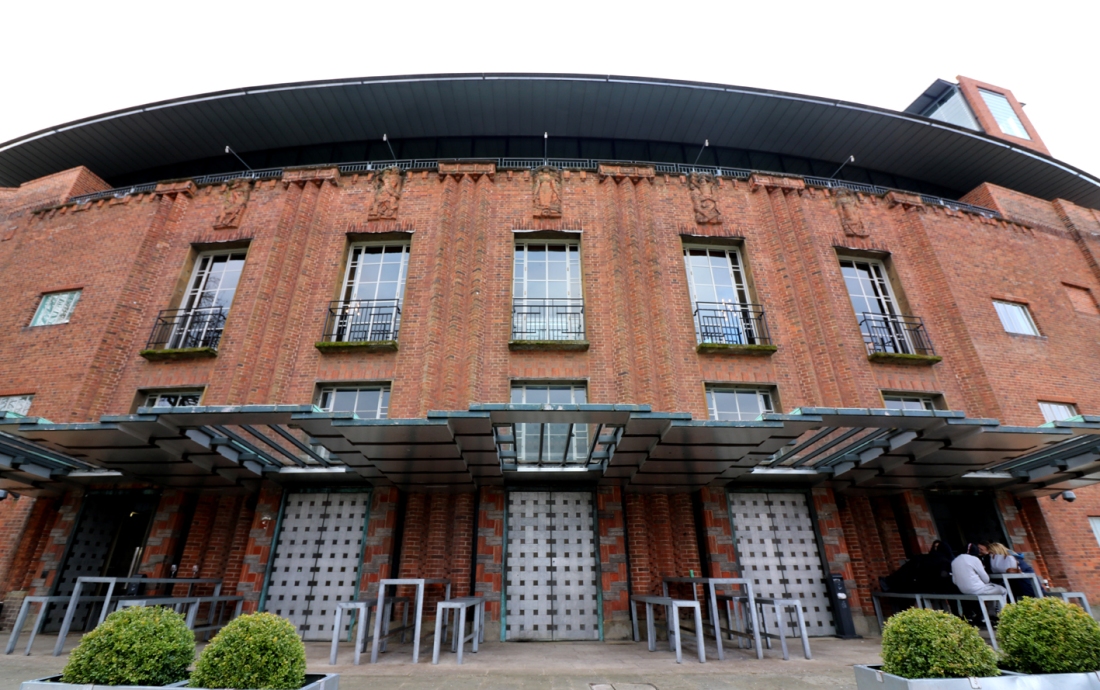 Externally, almost all of Scott’s design remains as intended, bar the odd bricked up window and loss of the riverside colonnade. The most prominent and decorative aspect being the North facing frontage and entrance, overlooking Bancroft Gardens. Its near symmetrical frontage is gently curved, with five bays separated by vertical angled brick fins. Double doorways in each are given shelter by one continuous stepped canopy clad in copper. Tall windows above this illuminate the bar area and sit directly below some marvellous brick relief sculptures (by Eric Kennington RA – an English sculptor, illustrator and official war artist) depicting Treachery, Jollity, Life Triumphing over Death, Martial Ardour and Love. To the left is the polygonal tower, with brick bond windows inset at irregular intervals. What was originally an open rooftop terrace above the entrance is now glazed and covered, home to the RSC rooftop restaurant (in which we had a delightful candlelit evening meal… I digress).

To the right of the original frontage is the most prominent addition of the C21st revamp. A glass fronted welcome centre and gift shop (which also acts as a connecting corridor to The Swan) adjoins ‘The Tower’ – a 36 meter red brick monolith rising up into the grey Warwickshire sky. Square, with chamfered corners housing continuous glazing and multiple globe lanterns. On top, a glass observation booth with overhanging zinc clad awning. While I’m a natural sceptic when it comes to ‘blending’ different eras of architecture, the tower is undoubtedly a resounding success. It acts not only a distinctive landmark in the town, guiding lost tourists to the playhouse threshold, but creates a focal point, adding drama to the substantial mass of the complex. 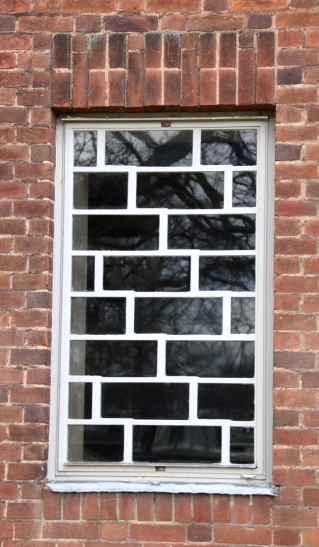 The riverside terrace is a continuation of Scott’s frontage. Five smaller bays, with tall windows (tea room & bar) lead to two double doors with marvellous streamline canopies. Beyond this another significant modern addition in the form of improved dressing room facilities. Riverside balconies from the red brick block are encased by a grey steel exoskeleton, and finishing with what I can only describe as a unit resembling two ‘zinc clad shipping containers’. 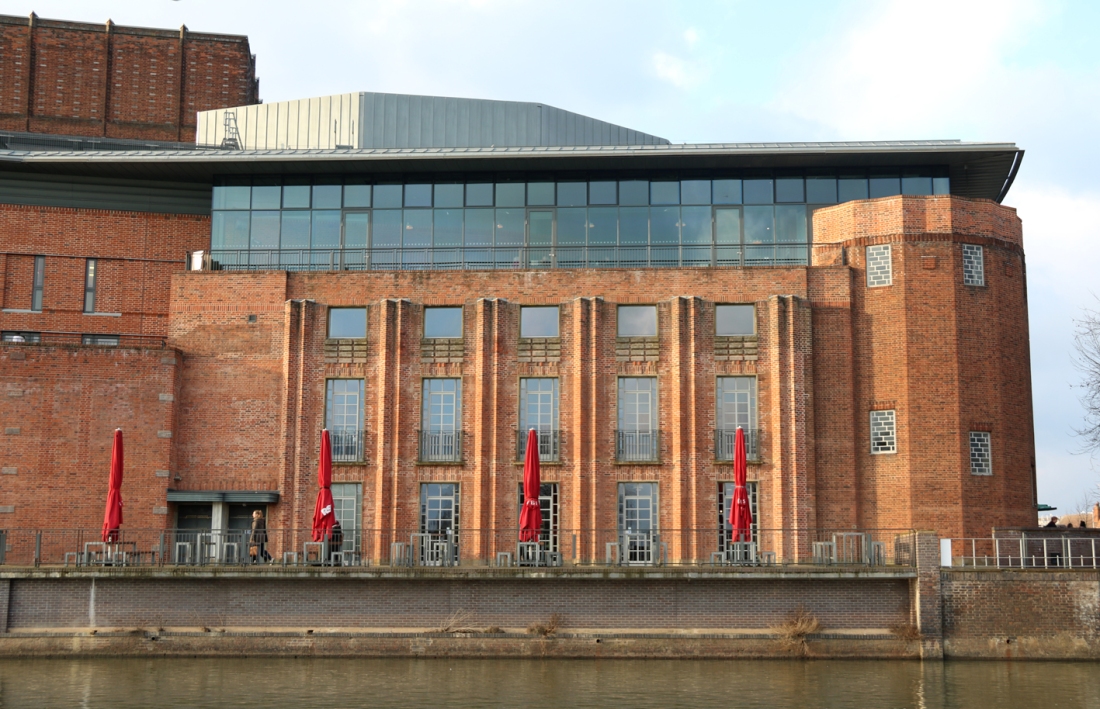 The South face is made up of the aforementioned Swan Theatre, a feast of Victorian era nostalgia, that is no doubt cited as many to be the ‘prettiest’ wing of the complex.

The new primary entrance is via the gift shop and box office. Turn left into the main building and you find yourself circling the huge brick silo housing the new performance space on wonderfully patinated oak floorboards, reclaimed from the original  stage. The original back wall of the auditorium remains, with parts of the old render giving clues as to its previous layout.

Continue round and you’ll encounter Scott’s foyer, bar and stairway, all remaining virtually untouched. A wonderful Jazz-Age cocktail of chrome, marble, brick, and rich dark veneers greet and delight the eye upon entering. The ticket booths, an unusual amalgamation of the machine age meets medieval armament, are available for all to goof at and pose through. Pass under the giant integral ‘1932’ clock, through the giant chrome doorway and you are greeted with the green marble spiral staircase. Tactile geometric slabs to the centre, and a smooth chrome banister to the outer.. reminiscent of Oz’s Emerald City. The original 30’s features continue on the first floor in a similar vein, beautifully preserved and oozing with charisma. 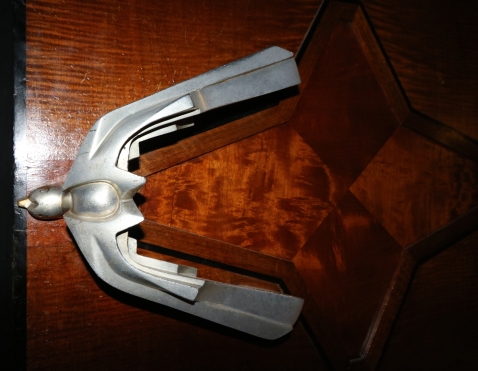 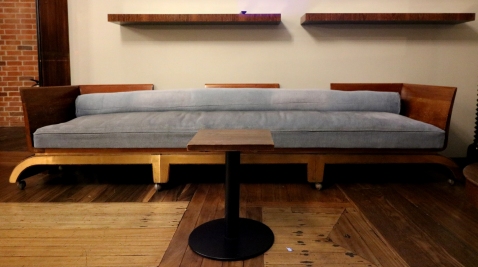 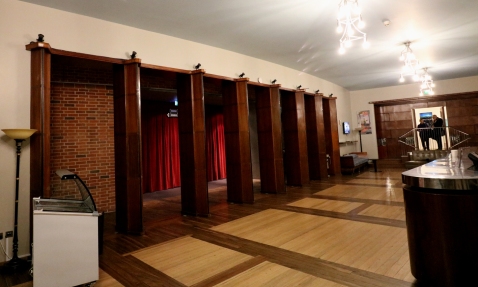 The new, smaller performance space has a reduced capacity of 1040, with the desired effect of creating the intimacy that its predecessor never possessed. Members of the front row sit with their noses mere inches from the edge of the stage, with two gantries, allowing cast to enter from three separate locations. Behind the internal rear walls, the circular auditorium corridors transform once the performance beings, curtains drawn to reveal hidden dressing rooms and storage space in one orbital back stage area.

There is so much more to be said about this wonderful iconic theatre, its past present and future, its vital role within the local economy, and the unique international allure it holds for tourists. Hopefully at some point the RSC will publish a full blown hard back history of the theatre, packed with lots of juicy archive photographs and first hand accounts. In the mean time, I highly recommend a visit, we’re already planning a return trip.. and next time, we’ll be sure to get tickets for a performance. 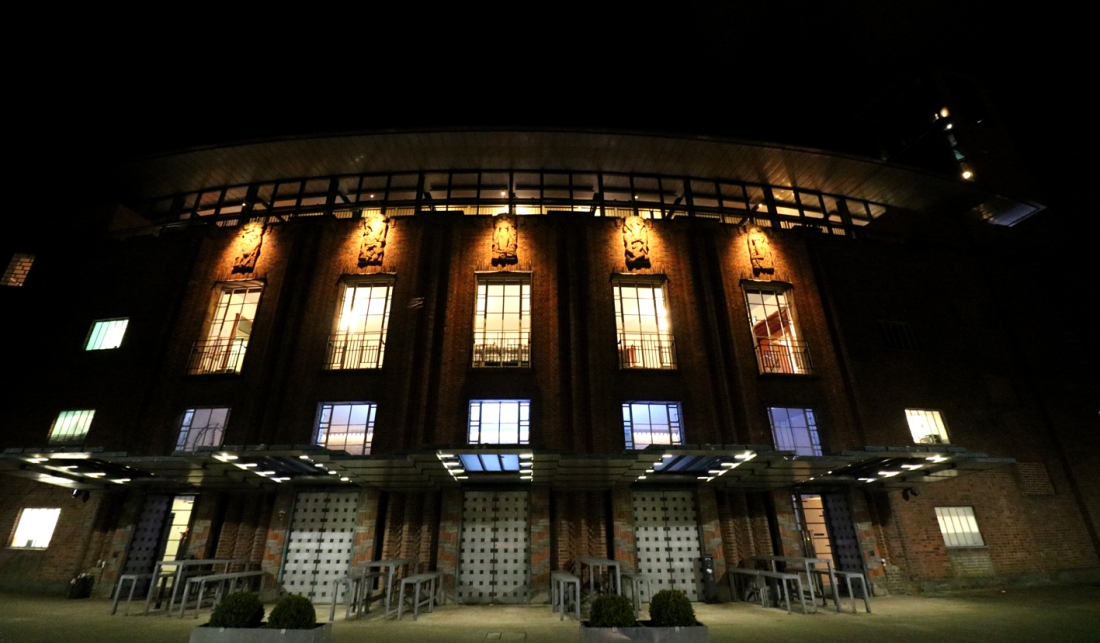